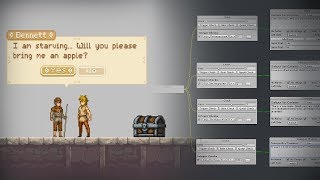 We want to inform you about what we have been up to since the Kickstarter campaign. As you may have noticed, there has been a lot of interest to have Faeland on console, especially on Switch. Not just from you, but also the Youtoubers that played the prototype during the campaign and the Press expressed how the Switch will be Faeland’s perfect outlet, which of course aligns with our own thoughts and vision for Faeland.

Since we did not reach the Stretch Goal to partner with a Console Porting company, we had to reevaluate our next steps. We had to find a solution that we were happy with, which was to either advance the porting work to make it less costly before finding a possible partner, or prepare for making the console porting ourselves. We needed to come up with the best solution that could benefit Faeland as well as its players, and us the developers. We did not rest until knowing we chose the best possible path. After a lot of thought and research, we can proudly announce today that we have moved Faeland to Unity game engine!

We spent a great time and effort, not just studying different options and game engines, but implementing our own tests to make sure it would be a good fit for us and our workflows since the game engine must allow for custom tools, specifically aimed for 2D and pixel art. And we had to make good progress before finally making it official.

It was a difficult decision; switching game engines added an additional scope of work, but we had some odds in our favor since we were going to revise all the game mechanics with your feedback anyway, and how the code was written in order to expand it from the prototype to a fully finished game. This process meant a great opportunity to revisit everything we had in place and allowed us to optimize a handful of processes in the new engine. We have rebuilt the project in a way that has eliminated the need to repeat code making them reusable behaviors instead, allowing for an easier and more efficient expansion.

In addition we have already solved many technical difficulties and limitations we had with our previous game engine. Now performance is waaay better, a laptop with integrated graphics will run 60fps without hiccups. We solved issues with animations and behaviors going wild when the game was running above 60 fps, as a few of you experienced with the prototype. We have added fully customizable controls options and expect to have a wider compatibility of game controllers. We can also now fit any resolution with a pixel perfect image. This was an issue that we had, especially when targeting for the Switch which has 720p handheld and 900p docked, this was very important for Faeland to look as intended, not just on the Switch, and it’s now solved for any platform and any pc monitor / tv.

In the same way our new engine is allowing us to work with new great tools for building the environments, testing and debugging AI in real-time (mainly the enemies’ artificial intelligence), making it easier to expand the whole game project as we conceive it to be.

An example of the new AI improvements, enemies are now smarter and know when they hit a wall or are by an edge without special invisible limits (the new engine allow us to do real-time interaction tests) And yep… this is inside Unity already :D

However these good news do not mean Faeland is already confirmed for all the 3 consoles. We are taking the very first step to be technically capable of doing it significantly easier because the consoles have support for Unity. To have it on each console it still needs to be approved in order for it to be official, but right now we have made it a whole lot more achievable from our end.

Because of these big decisions we have not yet sent out the surveys, next we will want to wait until we have confirmation on each console porting, so that when we ask you on the survey your preferred platform, we will have the confirmed and approved options.

Regarding the final release, even with this added scope that was not in our initial plan, we are positive and continue to aim for our original estimated release date of Dec 2019. We are very excited because these steps are exactly what we need in order to cover Faeland’s ambitious scope, gaining also a much better standing point for future titles coming from us!

Thank you all once again for believing in us. You made this possible with your support!!

Next: As you know, the first part of the game is composed by new different areas from the ones in the prototype, we don’t have a playable version at the moment for you to check out all these new features, but know that this is our priority, aimed especially for those of you who want to get involved in the development process and share your ideas on how to get Faeland improved!